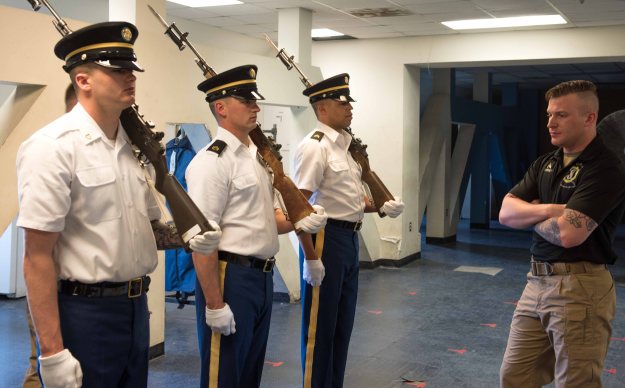 With the first week behind me, I was excited to begin the second portion of the ROP training.

In order to advance from week two of ROP, we were required to pass an Army Service Uniform inspection, complete a 60-minute stand and properly execute the stationary rifle manual positions.

Like in week one, the 60-minute stand would require us to move from the positions of attention and parade rest as the instructors review our uniforms.

During the evaluation of the stationary rifle manual positions, instructors would assess how well we executed each command called by the proctor. We would need to complete the evaluation with no more than three mistakes.

I knew that this week was going to be more of a challenge for me. However, I was determined to stay optimistic.

On the first day, we learned each of the stationary rifle positions and how to properly move between each of them.

At first, I felt overwhelmed by the amount of commands and positions we were learning.

“For a lot of new Soldiers the most challenging thing is getting over their nerves,” said Lomas.

As each day progressed I began to understand what Staff Sgt. Lomas meant when he said this.

I needed to not only to be deliberate and swift with my movements, but also mentally.

As I began to remind myself to stay calm and focused, my execution of each command began to improve. However as I would make small mistakes, I found it more difficult to apply this concept.

On the morning of testing I was hopeful I would do well. I was confident in my uniform and less concerned about the 60-minute stand. Although, I still was not sure how I was going to do with the stationary rifle manual positions.

The test started with a 60-minute stand. Because I knew what to expect, I did not feel it was as difficult as the previous week.

After passing this portion of the evaluation, we were given time to review the stationary rifle manual position evaluation.

I ran through the commands with the instructor one last time. I was pleased with how I executed each of the commands. I felt that I would have passed if it were the actual evaluation.

Now I was ready, I felt I was going to pass for sure.

“Tighten up,” yelled Lomas, indicating the start of the evaluation.

I snapped to the position of parade rest.

I was doing great!

As Lomas yells “All heads, right,” I made a mistake by slightly turning my head before dropping it. I should have dropped head straight down.

My confidence seemed to immediately drain from me like water down a drain.

I competed the test. However, sadly I did not pass. I ended up making a total of five mistakes.

“For you today, it was your nerves,” said Lomas. “You got into your own head, but that happens. It is all about staying confident.”

Now, instead of advancing to week three I will repeat week two so I can improve these skills test again.