Joint Base Myer-Henderson Hall, Va.— For Soldiers from the Caisson Platoon, 1st Battalion, 3d U.S. Infantry Regiment (The Old Guard), their everyday missions take them through Arlington National Cemetery paying respects to not only those service members no longer with us, but to their Families as well.  Once riders surpass 500 funeral missions, they receive brass spurs.  One rider’s accomplishments were recognized with never-before-seen custom spurs.

Staff Sgt. Steven Taylor, rider, Caisson Platoon, was honored April 27, 2017, during a ceremony at the Caisson Barn on Joint Base Myer-Henderson Hall, Virginia.

During the ceremony, Taylor was presented with a newly custom-made pair of black spurs for accumulating over 1000 funeral missions, a feat not achieved in recent Caisson history, if ever.

“In recorded history that we know of, there has never been a rider to serve in 1,000 funerals,” explained Capt. Austin Hatch, Caisson Platoon leader.  “The closest that we currently have recorded is 576.”

Taylor has been in the Caisson Platoon since April 2, 2014, and this accomplishment just adds to his achievements that have impressed the leadership here since his arrival.

“It’s an amazing show of leadership,” exclaimed Col. Jason T. Garkey, 3d U.S. Inf. Regt. commander.  “I can’t tell you how much we appreciate your dedication and professionalism.”

Gaining this prestigious honor is something Taylor didn’t expect but is extremely appreciative of.

“It’s definitely an honor to hit 1000 rides,” said Taylor.  “I’ve seen it as a number before as I marked them down.  Once I saw it was so close, I just kept on going.”

If 1000 rides was achieved prior to his accomplishment, it wasn’t done during one tour.

“There may have been people that have done it before,” said Taylor.   “But they had been here at different times in their careers.  It took me 3 years and 25 days to get 1000 rides.”

After hitting this monumental mark, Taylor will embark on his “last ride” in June, and will then move from Caisson to spend his time as the battalion retention NCO to continue helping Soldiers.

After all he has been able to accomplish in such a short amount of time, the battalion leadership still expects to see him continue to set the bar high.

“If he puts half the passion and dedication he does for us as he does honoring Soldiers and their Families,” said Lt. Col. Jody Shouse, 1st Battalion commander.  “Then it’s a win-win for sergeant major and I.”

Since his time in the platoon is almost complete, Taylor had some advice for fellow riders to get the best out of their time in Caisson, and to ensure repeated mission success. 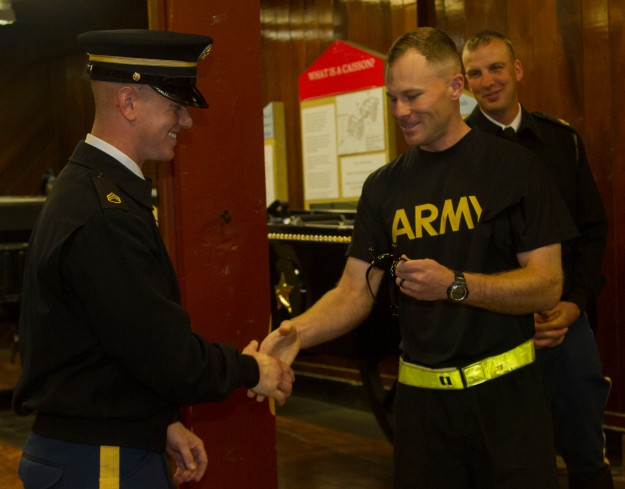 Capt. Austin Hatch, Caisson Platoon leader, presents Staff Sgt. Steven Taylor with custom-made black spurs during a ceremony at the Caisson Stable on Joint Base Myer-Henderson Hall, Va., April 27, 2017.  Riders receive brass spurs for finishing 500 funeral missions, but since Taylor was the first to surpass 1000, custom spurs were made for the achievement.a caption 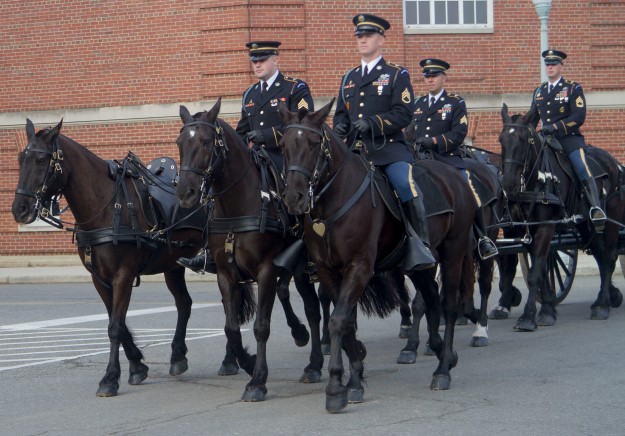